Heh folks this is a link to my latest blog. This is sought of a continuation on, from my "business before music" blogs. I hope you find it useful.

Words and music, Verses Influence
Posted by Unknown at 1:34 pm No comments:

Business before music, Pt 2, sorting out a [% ratio] agreement 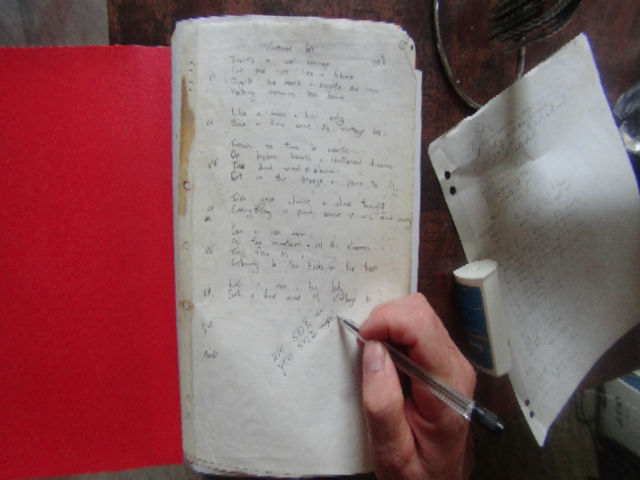 Just like most original songwriting musicians. Writing songs in the beginning was the priority. "It's the only thing you think that's important, when it comes to playing music".

As I blissfully continued with my part in the writing and arranging department, I would present new material to the singer for us to work on. We usually had a verbal 50% agreement on all/most of the songs.

For the most part, I did the music and the singer did the lyrics. I would also pen some songs myself, and they would be added to our list of increasing songs. All songs were still regarded, as a verbal [50%] agreement. I was happy with that because "I was guitarist in a band ". Sound familiar?

Later on, I found myself writing more songs on my own and my friend would come to my place and he would add some lyrics to my songs that were either missing a line or maybe a verse. Again, this was no problem, the idea was to complete a song, so we could play them.

I was eventually, writing more songs from start to finish, on my own. This felt like a natural progression for me and something I felt I needed to do, as I was enjoying the freedom and the expansion of writing songs, without having to involve other people in the writing process. "Selfish I know, but constant growth as a musician was becoming a vital ingredient in my musical makeup, at that time."

Finally I arrived where I could put a price on a song and sell it. That's when things got exciting for me. I spent some time working out, what will be my first release. Once I decided, I then went ahead and put my first song on the market through "Band-camp" for $1 per download.

Now it's time to get to what this post, is all about, and why a "business music plan" is so important to everyone who is, or will become involved in the process of writing songs for your band, or songs you write on your own.

I will focus the rest of this post on the song I had originally released "name withheld".

After about one week I realized I hadn't divided the song into a [% ratio] between my friend, who had contributed to the song and myself. I decided to pull the song from sale, and I contacted him r/e to working out a fair [% split] of the song between us. I then decided to go through our back catalog of songs that we had written, and started dividing them up as well, so we can register them with Apra/Amcos.[Australasian Performing Right Association.]

At this stage, all is going in a positive direction. We have discussed registering our songs and that is still on the cards with no issues. We haven't made any more progress since our original discussion. But we do live in different states and we are both busy people. We are determined to have our songs registered, when we can get the proper paper work done and agreed to by both parties. We realize though, that this going to take some time for us.

Write it on paper

Make sure all agreements are written down on paper and signed by everyone involved in the writing of a song. This will save a lot of stress for everyone down the track if you ever start making money from your music.

In the meantime, I have my 100% owned, original material that I can find avenues to sell without having to work out agreements with friends, co writers and contributors. This is very important to me as I can continue to push myself and promote my music, that helps me with my musical growth, without having to sort out agreements that should of been done years ago.

That's why it is so important to have a "music business plan" in action from the beginning. Once you start writing songs in a band or have friends contributing to your songs. You need to seek out an agreement per song as they're written, with each co-writer or contributor, agreeing to there share of the split. This allows you then to, play your songs when and where you wish, as everyone has agreed to the terms of the [% ratio,] of your/those songs.

The main message is to set up some [% ratio] guidelines for everyone in your band to follow and agree to, and be flexible with those guidelines, as songwriting scenarios can change and develop.

How many great songs, will we never get to hear because a [% ratio] agreement had never been sorted out between band members, co-writers or contributors, and the ongoing squabble of ownership rages on for years and years, and sometimes in court?

OK folks, this is something as musos we all need to focus on. [A music business plan]. I know what you're thinking; "I'll leave that to my manager," Which is probably OK, "if you got one of course". But understanding about the business side of any business, is your key to failure or success.

Most musicians want to play music, and fair enough, that's why we pick up our guitars and keyboards, drums, [in the first place], isn't it? But what happens when you start to earn some money? "We'll split it between the band members." Well, that all sounds good in theory. But there are some things to consider first. Let's have a look at a made up scenario.

Now, we'll go down the track a bit, and you have played a couple of awesome shows and sold a truck load of home-made Cd's. You all go back to your practice area, and there is your profit sitting on the coffee table. $1000. You beauty.

Drummer and bass player pipe up and ask for there $250 each for their efforts, as originally and verbally agreed upon in the beginning. But, guitarist, mumbles to the singer and says, "but we wrote all the songs!"

Question is, where do we go from here? The drummer and Bass player are within their rights to ask for what was, verbally agreed. Remember, [We'll split it 4 ways]. "But the singer and guitarist are the rightful owners of all the songs that the band is playing, and deserve to have the lion's share of the profit." RIGHT??

This is when, a business plan in the beginning, would help set up a payment system within the band before there were any profits to divide.

What elements then, do we need to look at, to start a music business plan?


This is a basic outline for a music business plan. You need to go deeper into understanding each section and what you need to do, to fulfill those areas, so that you all come away from each band meeting, with a positive and clear outcome.


How you do business with your fellow band mates, will decide if your band can survive the hills and valleys that it will go through, so take your time in these areas and make sure everyone understands what is happening, and their requirements and responsibilities. It will save a lot of heartache, time and stress.

[Hi everyone, my name is Darryl Steele and I am going to fill you in on my own music business plan. "I don't have a music business plan". I am now 44, and after 25 years since the first band I was in, it is now that I am looking into a music business plan with the original singer from that band.
We aren't even at section 1. COMPANY SUMMARY. We have discussed it [COMPANY SUMMARY] and agreed that this is what we need to do. But, a more important detail has occurred to me than the steps mentioned above. "It is probably more important than just a detail." Its communication, and the time needed to transfer and to understand all the relevant information between each person/member of your band/team. Communicating in a respectful manner is vital at this stage, and that all parties involved are on the same playing field, and not relegating a band member, a "less important person" because they don't understand all the details as quickly as everyone else. Patience is the key here.
"Just to let you know, I'm not very clued up on business thinking, so when I talk business, I like to take my time to understand each part of that business conversation, and that I'm happy with what transpired at the end of the meeting/conversation, before I can move on, to what is next." Hopefully jamming!

Posted by Unknown at 4:55 pm No comments: